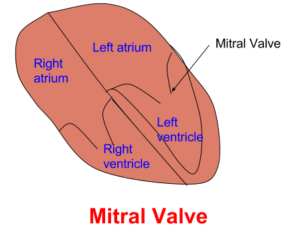 What are the important diseases of the mitral valve?

Mitral valve can be diseased in a variety of ways. Frequency of involvement depends partly on the geographic location as well. In the developed world, two common disorders are mitral valve prolapse and degenerative mitral valve disease. Mitral valve prolapse or mild bending backwards of the valve when the left ventricle contracts, may even be seen in up to 2% of the population. Simple prolapse may not produce any symptom. But if it is associated significant leak (mitral regurgitation), it can produce palpitation or breathlessness. Degenerative mitral valve disease occurs mostly in the elderly and usually produces leakage of the valve. Sometimes a lot of calcium may get deposited in the valve ring producing obstruction, more so in those with kidney failure and in the very elderly.

In the developing world, mitral valve disease is often due to rheumatic fever. Rheumatic fever produces leakage of the valve during acute attack. But later on it can produce either leakage or obstruction (mitral stenosis) or a combination of the two.

Damaged valve can be damaged further by infections (infective endocarditis). Leakage of the valve can also occur due to weakness of the papillary muscle when the blood supply to them is poor as after a heart attack. Rarely the valve may be abnormal from birth as a birth defect (congenital mitral stenosis).

What are the important symptoms of mitral valve disease?

Mild disease of the valve will not produce any symptom. But if the valve gets infected, prolonged fever can occur and the valve damage can progress.

Severe obstruction to the valve produces severe breathlessness at rest or during sleep. Lesser degrees produce breathlessness on exertion alone. Severe leakage can also produce shortness of breath. Leaky valves can also produce palpitation (undue awareness of heart beats). Sometimes heart rhythm becomes abnormal with valve damage (atrial fibrillation). This causes irregular palpitation. Clots may form within the heart in the presence of atrial fibrillation. These clots may move to other parts of the body and block blood vessels there. If it blocks blood vessels of the brain, it produces weakness of one side of the body (stroke).

What treatment options are available for mitral valve disease?

Mild valvular disease needs only prompt treatment of infections and follow up. Severe forms with symptoms may need medications and higher options. Severe obstruction to the valve needs relief either by surgery or balloon valvotomy. Balloon valvotomy is done under local anesthesia and does not need opening up the chest.

Severe leak in the valve can sometimes be stabilized by medical treatment. Higher levels of leaks with symptoms need either repair or replacement with surgical technique. Now a days procedures without surgery, using clips to control the leak are coming up and being used in selected cases. These clips can be introduced using small tubes, under live X-ray fluoroscopic imaging. They can be placed through small openings made in the blood vessel of the groin.