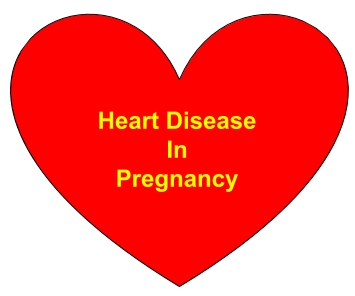 What are the risks of heart disease in pregnancy?

Important risk of heart disease in pregnancy is that the mother may go into heart failure with severe breathlessness. A potential risk of miscarriage is also there. In a rare form of heart disease with obstruction in the great vessel (aorta), a portion of the enlarged vessel may rupture during the strain of delivery, with catastrophic results. Another rare form of heart disease specific for pregnancy is peripartum cardiomyopathy which produces weakness of the heart muscle during pregnancy, usually improving after delivery. Severe forms of peripartum cardiomyopathy is also a high risk condition, leading to heart failure near the time of delivery or soon after.

Which types of heart diseases are poorly tolerated in pregnancy?

In general, any severe heart disease can worsen significantly during pregnancy as the work load of the heart increases markedly in later pregnancy. Heart diseases with some obstruction in the flow of blood is more likely to be worsened in pregnancy than leaks in the valves. Important obstructions which worsen in pregnancy are mitral stenosis (narrowing of the valve between the left atrium and left ventricle), aortic stenosis (narrowing of the valve between the left ventricle and aorta) and coarctation of aorta (narrowing of a region of the aorta). Birth defects of the heart which increase the blood pressure in the lungs markedly (Eisenmenger syndrome) also carries high risk in pregnancy. In Eisenmenger syndrome pregnancy is better avoided. In the other three obstructive conditions mentioned above, pregnancy can be considered after relieving the obstruction by treatment (surgery or dilatation using a balloon catheter).

At what term of pregnancy does women with heart disease start worsening?