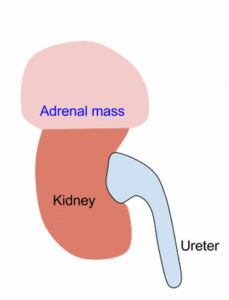 Surgery cannot cure all cases of high blood pressure. But when the high blood pressure is caused by certain swellings (tumor) which release hormones into the blood causing elevation of blood pressure, surgery is curative. One example is a mass arising from the adrenal gland known as pheochromocytoma. Similar mass when it arises from other locations, it is called paraganglioma.

Pheochromocytoma: Tumour arising from the adrenal gland just above the kidney

Paraganglioma: Tumour which secretes same hormone as pheochromocytoma, but located away from the kidney

Adrenaline: Hormone released from the adrenal gland which increases the heart rate and blood pressure

Noradrenaline: Another hormone released from the adrenal gland which increases the blood pressure

Hormone: Chemical substance released by one organ or group of cells into the bloodstream, which has action elsewhere

Veins: Blood vessel carrying deoxygenated blood back to the heart