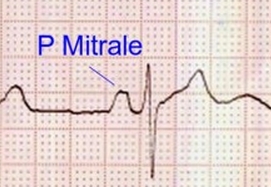 P mitrale is the wide and notched P wave of left atrial overload (left atrial abnormality), typically seen in lead II in mitral stenosis. Normal P wave has a width of up to 2.5 millimeters (duration of 100 milliseconds). When the P wave widens, it is due to left atrial enlargement as the second component of the normal P wave is contributed by the left atrial activation as it spreads leftwards from the sinus node across the Bachmann’s bundle, an interatrial conduction pathway.