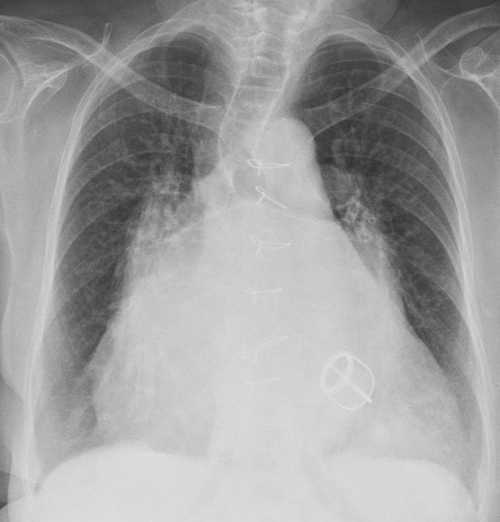 The Starr Edwards mitral prosthetic valve can be seen in the chest X-ray shown above, with the sewing ring above and the cage facing downwards towards the cardiac apex, as is usual with mitral position. Valve in the aortic position will have opposite direction with cage pointing upwards as expected. The silastic ball occluder (poppet) is not visible on the X-ray, though it can be seen on image intensifier fluoroscopy so that we can visualize the poppet excursions. There are four struts for the cage in case of mitral prosthesis and three struts in the case of aortic prosthesis. In this case two struts are overlapping on the X-ray so that it appears as if there are only three struts for this mitral prosthesis.

The X-ray also shows right atrial enlargement with the right cardiac border significantly shifted to the right. The double shadow of a grossly enlarged left atrium is also visible within the right atrial contour. Both right and left pulmonary branches are seen as significantly enlarged along near the corresponding cardiac borders. Sternal wires are also visible on this chest X-ray. It may be noted that the left bronchus is elevated due to left atrial enlargement. The left atrial appendage is not visible on the left cardiac border, probably because it was excluded during the surgical procedure to prevent potential thrombus formation.