Echo drop out in interatrial septum

An echo drop out in the interatrial septum is often noted in the apical four chamber view. This need not mean that there is an atrial septal defect. This is because the thin atrial septum in the region of the foramen ovale is often not imaged well in the apical four chamber view as the ultrasound beam is parallel to the inter atrial septum. For a good ultrasound image, the structure being imaged should be perpendicular to the ultrasound beam. In case of Doppler the beam should be parallel to the flow being imaged. LV: left ventricle; RV: right ventricle; LA: left atrium; RA: right atrium; PV: pulmonary vein; IAS: inter atrial septum; AML: anterior mitral leaflet; STL: septal tricuspid leaflet

This problem of echo drop out in the secundum region of the atrial septum was noted as early as 1977 by Dillon et al [1]. They found that drop outs in secundum location are not specific for atrial septal defects while those in ostium primum locations are. 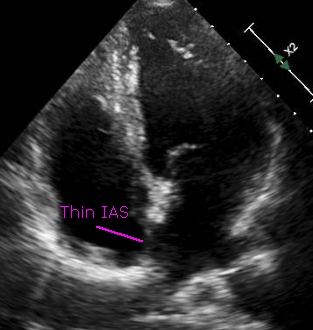 This image taken in a different phase of the cardiac cycle shows a thin interatrial septum in the region of the foramen ovale which had shown an echo drop out in the previous frame.

Subcostal four chamber view is better for looking at atrial septal defects because the ultrasound beam is perpendicular to the atrial septum in that view. Hence any atrial septal defect (ASD) noted in subcostal view is taken as real and not as a false echo drop out. The flow across the ASD is also well seen in subcostal view as the flow is parallel to the ultrasound beam. A red flow will be seen in case of left to right shunt and blue flow with right to left shunt (away from transducer).

My book on Amazon