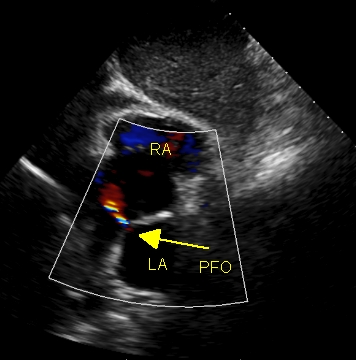 Patent foramen ovale (PFO) is a valvular opening in the fossa ovalis region of the interatrial septum. In fetal life, the foramen ovale shunts relatively more saturated inferior vena caval blood coming from the umbilical vein to the left atrium from the right atrium. This blood with higher oxygen level reaches the left ventricle and gets pumped to the upper part of the body including the brain. Superior vena caval blood streams to the right ventricle from the right atrium and reaches the pulmonary artery. Since the lungs are non functional, the blood from the pulmonary artery is shunted to the descending thoracic aorta through the ductus arteriosus from where it reaches the umbilical artery. Umbilical artery takes this relatively unsaturated blood to the placenta for oxygenation.

Soon after birth when the lungs start functioning, the pulmonary venous return increases left atrial pressure and the valvular foramen ovale closes. In the adult life, a partial probe patency of foramen ovale can be there is several cases, but shunting of blood is not common. If at all, it shunts from right atrium to left atrium (right to left shunt) during certain phases as with Valsalva strain. This transient right to left shunt is responsible for occasional cases of paradoxical systemic embolism and stroke.

When the left atrial pressure rises to due pathological, the foramen ovale may be stretched open and start shunting left to right. In these cases, the inter atrial septum is seen bulging towards the right atrium. But in a few cases, left to right shunting across the patent foramen ovale can be seen echocardiographically even without grossly elevated left atrial pressures.