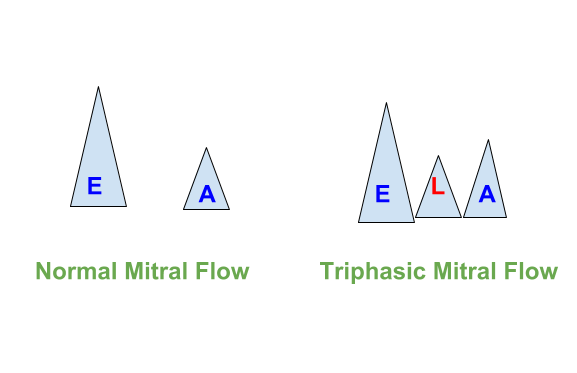 Triphasic left ventricular filling pattern has been considered to be a mixed pattern of restrictive filling and impaired relaxation. The third longitudinal movement of the mitral annulus on tissue Doppler is thought to be due to extra myocardial relaxation with a suction force.1 This suction force due to the delayed relaxation causes the mid diastolic flow which is manifest as the T wave or L wave. There is also a view that the third mid diastolic wave indicates advanced left ventricular diastolic dysfunction as is often present in hypertrophic cardiomyopathy.3 This was suggested by an association of L’ with higher E/E’ ratio, larger left atrium and higher proBNP levels.