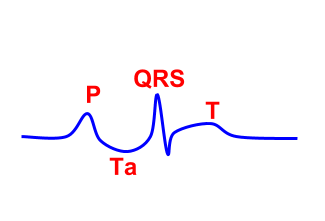 Atrial repolarization wave (Ta wave) is usually not evident on the electrocardiogram (ECG) as it has a low amplitude of hundred to two hundred microvolts and is usually hidden in the QRS complex. [1] It can also extend into the ST segment causing ST segment depression mimicking myocardial ischemia, especially during an exercise test. This can cause a false positive response. But this type of response can be identified by the associated depression of the PR segment so that the PR segment along with the ST segment forms a parabola, unlike the broken parabola pattern seen with true ischemic ST segment depression. The exercise time will be longer, more than six minutes, there will be no associated chest pain, and the peak exercise heart rate achieved is higher than one hundred and twenty five beats. Slavich G et al noted the role of atrial repolarization in ST-segment depression during exercise as 5.5 percent.
To study Ta wave when it is not obscured by the QRS complex, independent P waves in complete heart block are evaluated. Holmqvist F and associates [2] did this analysis in forty patients. They recorded standard 12-lead ECGs and transformed them to orthogonal leads and studied the records using signal averaged P wave analysis. They noted that the Ta wave polarity was opposite to that of P wave in all leads and the mean Ta wave duration was about 320 milliseconds. This was in contrast with the mean P wave duration of about 120 milliseconds. They concluded that even though the peak of Ta wave may occur within the PQ segment during normal AV conduction, it may be difficult to differentiate between normal and abnormal atrial depolarization unless an algorithm for QRST cancellations is used.

This site is not meant for any medical advice or treatment decisions. If you have a medical condition, please contact your physician for advice. We do not endorse any products or services appearing on the site as advertisements. We do not intentionally collect or store any personal information. Third party services displaying ads may collect anonymized information over which we have no control. If you feel that it is not acceptable to you, please do not continue on this site.

© 2022 All About Cardiovascular System and Disorders.
Go to mobile version