Investigations and management of dilated cardiomyopathy 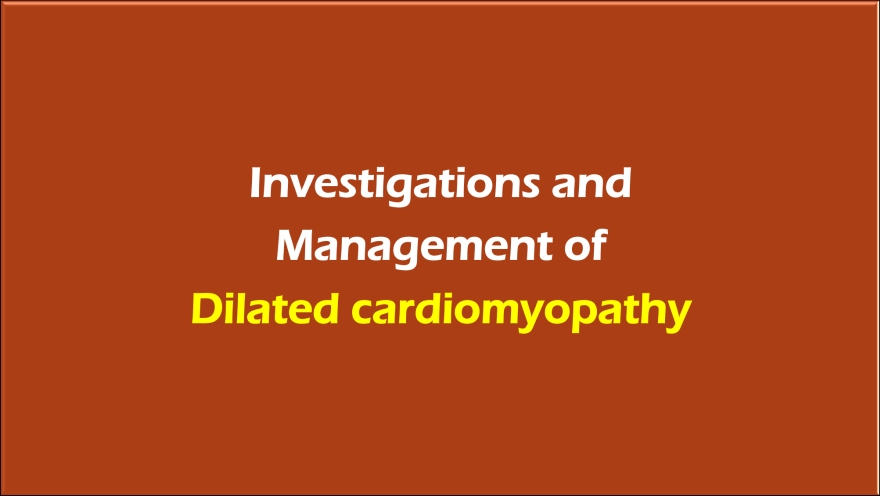 Chest X-ray PA view will assess the cardiac size in dilated cardiomyopathy and show evidence of pulmonary congestion. Sick persons may present with features of frank pulmonary edema in the form of hilar haze or bat wing pattern of pulmonary edema. Significant left ventricular dysfunction can exist without much of cardiomegaly on chest X-ray as well.

ECG may show sinus tachycardia, left atrial overload and sometimes left ventricular hypertrophy. A wide QRS complex with left bundle branch block pattern may indicate potential benefit from cardiac resynchronization therapy (CRT). ECG is more useful in suggesting diseases which have to be considered in the differential diagnosis like coronary artery disease and severe aortic stenosis. Severe aortic stenosis with heart failure may not have an audible murmur due to the low output state. The murmur may reappear on treatment of heart failure. In aortic stenosis, unlike in aortic regurgitation, severe left ventricular failure need not proscribe surgical options.

Coronary angiography is considered in those with age > 40 years and a history suggestive of coronary artery disease or having a high coronary risk profile or an abnormal ECG.

Limitation of activity based on functional status is recommended. Salt and fluid restriction is needed in those with systemic or pulmonary congestion. Medical therapy consists of Angiotensin converting enzyme (ACE) inhibitors, diuretics, digoxin and carvedilol. Recent addition to this group is ARNI blockers. Hydralazine / nitrate combination can be used as a vasodilator when ACE inhibitors are not tolerated. Another alternative is angiotensin receptor blocker (ARB).

Anticoagulation is recommended if the ejection fraction (EF) is <30%, when there is a history of thromboembolism and in the presence of mural thrombi. A thrombus is dilated cardiomyopathy has a higher chance for embolisation than in coronary artery disease. In coronary artery disease, the thrombus is kept away from the bloodstream by a segment of myocardium which is poorly contracting while the rest of the myocardium contracts well. In dilated cardiomyopathy since the hypokinesia is global, the thrombus is within the region of the blood flow and has a higher chance for breaking off and embolisation. Dopamine, dobutamine and phosphodiesterase (PDE) inhibitors like amrinone and milrinone may be used to tide over a crisis in acute decompensated heart failure with dilated cardiomyopathy. Cardiac resynchronization therapy (CRT) is useful in those with dyssynchrony as evidenced by wide QRS complex and left bundle branch block pattern on ECG. Cardiac transplantation is of course the last option for refractory heart failure in dilated cardiomyopathy.