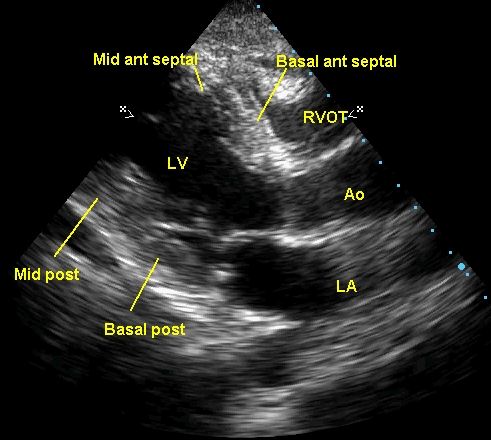 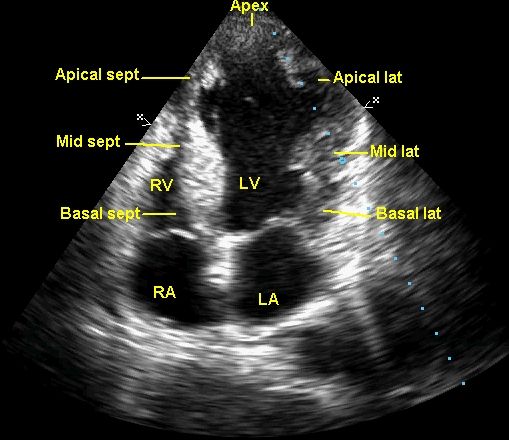 Apical four chamber view (apical 4C view) gives information about 7 segments: Apex, apical lateral, apical septal, mid septal, mid lateral, basal septal and basal lateral. Of these, the apical segment can be supplied either by the LAD or LCX. Apical septal and mid septal segments are supplied by the LAD. Basal septal segment belongs to the RCA territory while the apical lateral, mid lateral and basal lateral segments are in the LCX territory. The echo video at the end of the post shows almost akinesia of apical septal segment and dyskinesia of apex and apical lateral segments. The apical septal segment appears thin as well. Over a period of time, when fibrosis ensues, a dyskinetic segment can become akinetic causing improvement in the wall motion score. Wall motion score can also improve when areas of stunned myocardium regain contractility. Similar recovery can also occur after revascularization of hibernating myocardium.
Apical two chamber view (apical 2C view) also shows seven segments: basal inferior, mid inferior and apical inferior segments on one side and basal anterior, mid anterior and apical anterior segments on the other side. In addition there is the apical segment at the apex. Basal inferior and mid inferior segments are supplied by the right coronary artery while the apical anterior could be either by the RCA or LAD. All the other segments in this view are in the LAD territory. 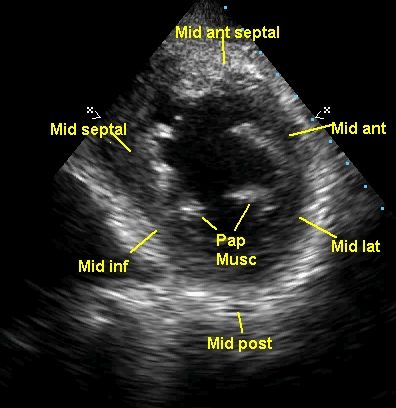 Parasternal short axis view (PSAX view) can be taken at three levels for assessing wall motion scores: mitral valve level (six segments), papillary muscle level (six segments) and apical level (four segments). The segments at the apical level are apical septal, apical anterior, apical lateral and apical inferior. The segments at papillary muscle level are mid septal, mid anteroseptal, mid anterior, mid lateral, mid posterior and mid inferior. The segments at the mitral valve level are basal septal, basal anteroseptal, basal anterior, basal lateral, basal posterior and basal inferior. Mid inferior segment is supplied by the RCA while mid posterior segment could be either by the RCA or the LCX. Mid septal and mid anteroseptal segments are in the LAD territory while the mid anterior could be in the LAD or LCX territory. Mid lateral segment is in the LCX territory. In the video below, the PSAX view at the papillary muscle level shows mid septal and mid anteroseptal hypokinesia. These segments belong to the LAD territory.